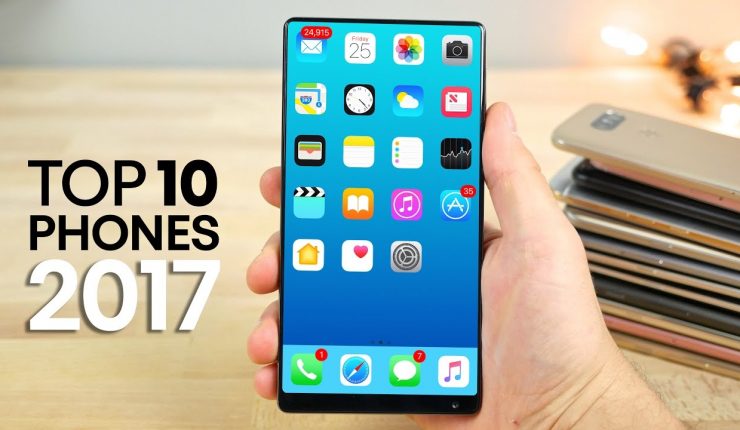 Here’s a look back at the biggest flagship smartphone launches of the year 2017.

One of the biggest smartphone launch of the year is Apple’s tenth-anniversary iPhone, iPhone X. The smartphone comes in two storage variants — 64GB and 256GB. While the former is priced at Rs 89,000, the latter costs Rs 1,02,000, making it the first iPhone in India to cross the Rs 1 lakh mark.

Samsung Galaxy S8 and Galaxy S8+ are Samsung’s flagship smartphones for the year 2017. The smartphones debuted the company’s home-grown Bixby digital assistant. Other highlights of the smartphone include bezel-less ‘Infinity’ Display, iris scanner with facial recognition functionality. The handsets recently received price cuts in India with the S8 now available at Rs 53,900, while the Galaxy S8+ now selling at Rs 58,900. Samsung Galaxy S8 and Galaxy S8 Plus (64GB variant) were launched at Rs 57,900 and Rs 64,900 respectively making it a price

Another big smartphone launch of the year is Samsung’s flagship phablet Galaxy Note 8. Galaxy Note 8 is the first smartphone from the company to sport a dual-rear camera setup. The rear camera includes two 12MP sensors, while the first one is a wide angled lens with f/1.7 aperture, the secondary camera includes a telephoto zoom lens with f/2.4 aperture. On the front, there is an 8MP selfie shooter with f/1.7 aperture.

Successor to Google’s Pixel series smartphones, Pixel and Pixel XL smartphones that launched last year, the Pixel 2 and Pixel 2 XL come in two storage options. The Pixel 2 is priced at Rs 61,000 and Rs 70,000 for the 64GB and 128GB storage variants respectively in India and the bigger-screen Pixel 2 XL will cost Rs 73,000 for 64GB variant and Rs 82,000 for the 128GB storage models.

Nokia 8 is HMD Global’s most expensive smartphone to launch in the year 2017. Priced at Rs 36,999, the smartphone is the first from Nokia to sport a dual rear camera setup. Another first for the Nokia 8 is that it comes with ‘Bothie’ or Dual-Sight mode. This Dual-Sight simultaneously connects both the front and rear cameras in a split screen visual and works for both photos and videos.

Priced at Rs 51,990, the biggest feature of the HTC U11 are its ‘squeezable bezels’. The smartphone comes with eight sensors on the side bezels to register the squeeze. These sensors are integrated with the Edge Sense and lets users long press to launch any app. The feature can be customized by modifying settings. The U11 is also the first smartphone from the company to come with dual digital assistants — Amazon’s Alexa and the Google Assistant.

At the time of its India launch, the Sony Xperia XZ1 was one of the first non-Google smartphones with Android 8.0 out of the box, making it one of the highlights of the device. Another much talked about feature is its 3D scanning mode that lets the device capture high-resolution 3D images of an object.Priced at Rs 44,990, the Sony Xperia XZ1 boasts a 5.2-inch full HD (1080×1920 pixels)

Today app developers need to create an instant solution for the smooth running of any apps. While components are available...

A landing page is a one-page web page that is used to drive traffic to the conversion of the business....

While the pandemic accelerated the adoption of digital transformation and emerging technologies across industries, there has been a tremendous increase...

There is high competition in business marketing worldwide and it is increasing day by day. Digital marketing is the most...

If you decide to use a landing page to improve your business, you have to do it right. Follow the...